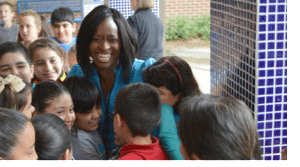 “What an incredible honor for Jillian Howard and CCISD”, Superintendent Dr. Greg Smith said in a release Friday, Oct. 4, 2013. “She represents the high standards of our district and all of our outstanding teachers. We congratulate Mrs. Howard for leading the way in education with passion, determination and a focus on doing what’s right for our students and their families.”

Six educators from across Texas were chosen as finalists in the 2013 Texas Teacher of the Year program.

“These phenomenal educators symbolize the thousands of teachers across the state who are committed to making a difference in children’s lives,” said Johnny Veselka, executive director of TASA.

In their Teacher of the Year applications, each educator offered insight into their teaching backgrounds, philosophy and style. Jillian Howard wrote, “Growing up, school was my only refuge. As the daughter of a fourteen-year-old single mom, I was forced to become an adult at a very early age. I worried about being alone, about the gunshots that rang through the night, and about the Lord protecting me. But school was different; it was the place where I could be a kid. If I was lonely at home, at school there was companionship. If I was in fear at home, I felt safe at school. If I didn’t get a meal at home, I could eat at school. If at home things seemed hopeless, at school therein lay hope for the future. School gave me a sense of empowerment in a life where I felt powerless. I teach now with a burning conviction to recreate the refuge that school had been for me.”